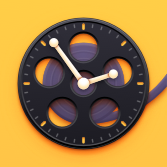 This press kit, including app images and a full-sized icon image is available to download here.

A set of iPad screenshots are also available here.

ReelTime is an app for people who want to be able to track the movies and TV shows that they want to watch or are already in the process of watching.

ReelTime is an iPhone and iPad app for tracking content for both the big and small screen. TV shows and movies are a big part of people’s lives but with so much content available it can be difficult to keep track of what we are watching. It can be even more difficult to track the things we want to watch in the future. Especially if they haven’t been released yet.

ReelTime makes tracking TV shows and movies as easy as can be, all from the comfort of the most personal device people own — their iPhone. Want a little more space? The iPad version of ReelTime offers all the same features but with more room to breathe.

ReelTime tracks content by hooking into Trakt, syncing a user’s watched history, watchlists, and star ratings for TV shows and movies. Advanced Monitoring goes a step further by keeping tabs on what’s in a user’s library. If something changes, ReelTime tells them — titles, statuses, runtimes (movies only), posters, and release date changes can all trigger a notification. Which changes fire notifications is customizable by the user, too. We won’t spam them with information they don’t want or need.

Other features of note include:

ReelTime is for anyone and everyone, whether they’re movie buffs or someone who wants to make sure they’ll never miss another episode of the latest Netflix smash hit!

ReelTime is a free download and does not require any in-app purchases or subscriptions. The app doesn’t track you or collect any user data, either.